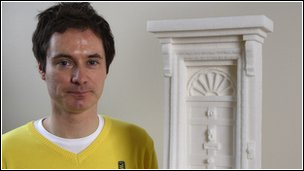 The home of David Cameron is known all around the world for being the house of the incumbent Prime Minister. Brendan Jamison of Northern Irish descent carves thousands (even more on occasion) of sugar cubes into intricate designs for a living, and has received great appraisal for his work.

An entire section of the address will display different works of Prime Ministerial icons, and world leaders from Canada to China will get to see the door they just stepped through made of 100% sugar. Brendan, only 32, used 5,117 sugar cubes, all stored in a cold environment, to work on the 2-month project.

The exhibit itself is not intended to create profit for any of the artists, nor the government, but to show other countries and cultures the best, most innovative art from the UK. “It is a great honour to exhibit in Number 10 and is definitely a career highlight.” he said in an interview with the BBC.

He has previously made sculptures of Helen’s Tower and the Tate Modern, both to scale, the latter containing 71,908 cubes of the same nature. It weighs 224kg, and along with Helen’s Tower, was showcased in Sotheby’s on Bond Street, London. Since youth, he has been interested in building, playing with Lego blocks, making them into spaceships, castles and even televisions!

What do you think? Will you be going to see the artwork in Number 10? Or will you have to wait until public release? Do you think you could do the same thing he does? Leave your thoughts below!