A 100-year-old sprinter has broken eight records for sprinting and is aiming for a ninth! 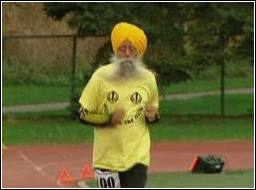 Here’s a piece of news you don’t hear every day. Fauja Singh, a 100-year-old British man, has managed to race his way to eight world-records for sprinting and is aiming to achieve a ninth record soon! He is expected to achieve his ninth world-record if he finishes the Toronto Marathon. Mr. Singh was born in India in 1911 and decided to take part in competitive running at the age of 89, after the death of his wife and son due to cancer.

Mr Singh broke the records for 100-year-old men in all eight sprinting distances on Thursday. To ensure/notify him of whether he achieves his ninth of record on Sunday, The Guinness Book of World Records will be on hand to document his attempt at completing a full marathon distance.

Mr. Singh’s translator and coach Harmandar Singh said that ”running has given him a new focus in life” and “the records are an add-on bonus”.

If you’d like a short sample of his running and what else he said, then visit here: http://www.youtube.com/watch?v=eXZpwEISUWQ

So, it looks like the secret to a long life is exercise… great!