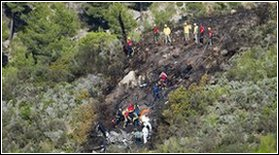 The Foreign Office has said that two British nationals have been killed in Majorca when a helicopter they were flying in crashed. A spokeswoman confirmed that the accident happened on Saturday but gave no further details on the identity of the Britons due to a formal identification needing to take place. The only other comment she placed was “We have offered consular assistance to the family.”

The local police said the helicopter crashed between Andratx and Estellecs on the south-west tip of the island (according to the AFP news agency), however an emergency service’s spokesperson had more to say about the incident

“We received several calls at around 11:10am from witnesses saying they had seen a helicopter crash down in flames in a wooded area. Firefighters, paramedics and police officers were immediately sent to the scene.” ~ Jose Luis Montoya being quoted by the ‘Daily Telegraph’.

When the emergency services arrived at the scene, a small forest fire was starting to spread but it was quickly put it out just before destroying 1/4 of an acre of woodland.

*For those who don’t know, Majorca is a Spanish island.