A record on-the-night total of £26 million was raised for Children in Need!!! 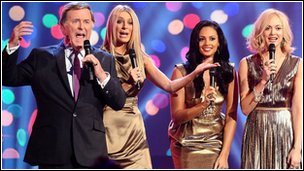 The BBC’s annual Children in Need show, raised a record breaking on-the-night total of £26,332,334 on Friday evening/Saturday morning. Host Terry Wogan announced the on-the-night total at the end of the 6 hour celebration at 02:00 GMT and a wave of applause & cheering erupted from the crowd! Terry Wogan was also joined by co-hosts Fearne Cotton, Alesha Dixon and Tess Daly.

The annual show was preceded by a ‘One Show’ special which showed co-presenter Matt Baker completing his 500 mile rickshaw ride from Edinburgh to London in an attempt to raise money for Children in Need. His journey started on the 11th of November and he would sometimes cycle for up to 10 hours each day… overall, he raise a huge total of £1.2 million for Children in Need!

Other acts that featured on the show were;

– Gok Wan… who sang.
– The cast of Eastenders who performed a medley of hits by Queen.
– The cast of the Wizard of Oz (musical) who revealed they had raised £10,000.
– A supergroup called ‘The Collective’ which featured Gary Barlow, Ed Sheeran, Tinchy Stryder, Chipmunk, Ms Dynamite, Tulisa, Wretch 32, Rizzle Kicks, Mz Bratt, Dot Rotten and Labrinth who performed the charity single for this year ‘Teardrop’.
– Lord Sugar… who featured on a special edition of Dragon’s Den.
– The cast of Outnumbered.
– THE MUPPETS!!!

Terry Wogan presented a fabulous ending to the show by thanking the British public for all their donations… even in this tough economic time!