Another of the worlds most wanted is killed in a shoot-out with Somali Forces. 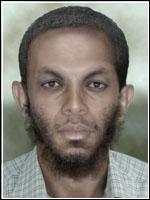 Al Qaeda chief Fazul was wanted by the Americans for his part in the planning of the US embassy truck bombings, which took place in Nairobi and Da es Salaam which were reported to have killed 224 people in the year of 1998.

The chief of Kenyan police says “We have been told that there was two terrorist’s who were killed in Somalia last week.” Somali TFG Officials men were traveling in a pick-up truck carrying mobile phones, medicines and laptops and they were killed during a road block in Mogadishu after they refused to stop the vehicle.

Another Somali official says the pair had taken the wrong turn which took them to an area which was under TFG surveillance.

A Source which was close to the investigation says that Fazul Abdullah Mohammed was traveling with a passport that went by the name of Daniel Robinson which was issued on April 13th, 2009 but when the passport was validity checked it stated that its owner had left south Africa and had moved to Tanzania on March 19th where he was granted a Visa.

Abdullah’s body has been sent to American officials were it will under-go DNA tests and identified for 100% conformation.

Fazul Abdullah Mohammed was born in the Comoros islands, on August 25th 1972 and then joined Al Qaeda in 1991, aged 19. He was made chief of all east African operations in 2002. That same year, Fazul planned an anti-Israeli attack in Mombasa which killed 15 people.