Is extinction getting worse?


According to a major scientific study – there will be almost nothing left to fish in the middle of this century! Scientists discovered that the amount of fish in fisheries has dropped dramatically by a third, and the rate of decline is accelerating. 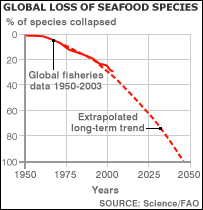 This may not be the end of all fish! Creating more protected areas for fisheries could safeguard existing and future stocks of fish, possibly even stopping fish from being extinct in the future. It doesn’t seem likely though, as bigger nets and advanced technology is making it much easier for companies to fish and catch greater “loads” in the sea and in the business world, survival is 1 of the biggest aims – the environment is just seen as an obstacle.

You might be thinking, ”Oh well, won’t happen in my century” , well scientists have predicted that fish could literally have vanished within 50 years!

The graph on the right, will show some information about past fish “stock” and future fish “stock:

Keep your hopes up because all hope is not lost – there are still many areas where fishing is banned / restricted, especially for other sea creatures such as whales and sharks.

So make sure you enjoy your fish fingers, because they may not be here for long!

Do you think the amount of animals becoming extinct is insane? Will you miss the little fish swimming in the sea? Share your view now by clicking “Read More & Comment”