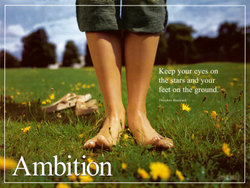 I was writing an English assignment sometime last year. Our task was to write about our ambitions. A lot of people stood up and said that they didn’t know what to write about; but I was the opposite. I instantly knew what my ambitions were. Well, I thought I did anyway. I wrote my speech for it, and it was pretty good. I was reading over it again recently, and I realised that none of it was actually important.
The thing is, I can’t believe that all this time I’ve been in the dark – and the really sad thing is that I never even knew it. The irony is that all it’s finally taken is an English assignment for me to realise what my true ambition is. I mean, I can tell you about my luxury penthouse suite or my cats, or my super-expensive car in California, but it really doesn’t matter. There are more important things going on in the world.
I’m not saying that I’ll be completely abandoning the original plan, because I will be going to a good university. I will be getting a good degree. And yes, the chances are that I will be moving to the US. But as
for the penthouse? That can wait. And the car? Well, as much as it pains me to say, but that can wait too. Because now I know that it’s the things you don’t have that always mean the most – what you do have is irrelevant. Following this realisation, it is now my objective to show the world that material wealth, although important, should not cloud our judgement or cause us to forget the value of our other fortunes – these mostly being the ones we can’t see.
The war in Iraq is just one of the issues highlighting this point. America needs fuel; and the simple truth is that the government is willing to risk the lives of thousands of people in order to get it. I’m not very good at foreign affairs… this is the best example I could think of.
Now, I don’t know about you, but in my opinion, the day that want of power exceeds the worth of a human life means that there are serious problems with our society.
But unfortunately, the USA isn’t the only one guilty of this – I certainly am too. I got so caught up in my vivid hopes for the future, that I forgot to consider the impact upon those I would leave behind. I was always aware that one day I would have to move away from my family and head out into the unknown to pursue my dream, but I’ve now found myself wondering whether it’s unfair to expect them to support me. After all, the only thing I would be giving them is a very large debt.
The problem is, when you have everything, you lose sight of the different values certain things carry, so that eventually a diamond will become equivalent to a pebble.
Anyway, it’s all well and good me telling you how I intend to change the attitude of people across the planet, but putting it into action is another obstacle altogether. I of all people know how hard it is to bury the past, and I’m afraid this is where I have failed in my own philosophy. There are many things I regret doing or being a part of, and every time it happens, I wish I was strong enough to do something about it. I never am. I know that I’ve missed my chance now. I learnt the hard way, but I don’t think it should have to be like that for everyone else. This is what motivates me towards my goal, as I’ve recognised that now is the time for people to learn to appreciate what you have before it’s too late.