The USA have signed a crucial deal saving themselves from national bankruptcy. 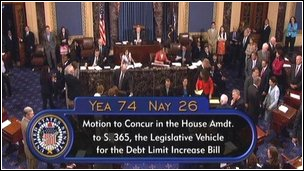 Yesterday, the United States were officially on the brink of a financial default, a term used to describe when a debtor cannot pay their loan installment. This nearly happened and would have led to Washington losing their AAA credit rating. But with debts exceeding $14 trillion, I’m surprised they’ve kept it this long. The final challenge for the bill was the senate vote, a group of 100 national officials (2 from each of 49 states, 1 from Nebraska and the President). As the picture shows, the bill won by a large margin, almost 3:1. I’m surprised anyone would decline, who doesn’t want to help their country out of debt?

Even though this was passed, financial stock markets failed to rise. On Wall Street, one of the most famous American stock groups fell by 2% just on Tuesday. Japanese Nikkei also followed a similar route, dropping by the same amount this morning. Moody’s, the credit rating agency is now stating that Washington’s AAA score is under a “negative outlook”. Chinese Dagong have also downgraded the US from A* to A.

This came just 10 hours before the country would have been declared default, unable to pay international bills. There had been hours-long talks between Republicans,  Democrats and the White House which turned voters original thoughts more positive to the bill. Shortly after the vote, President Obama spoke to news crews, Senators and the public “[it was] pretty likely that the uncertainty surrounding the raising of the debt ceiling for businesses and consumers has been unsettling”.

He also claimed that the country could’ve avoided this completely and that debts will not go away by spending cuts alone, and he has personally asked congress to “create jobs” and “increase customer confidence”. In the vote, 19 of the Nay came from Republicans and the remaining 6 from Democrats.  Those that did universally stated that raising this limit would help the opposing party, so much so that it would be worth losing a perfect credit rating. Bitter enemies…

What do you think? Are you an American and suffering this crisis? Do you think the bill will help lift the gargantuan debt? Or is it not worth it? Leave your comments below!