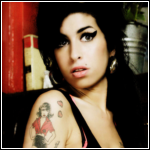 Even death can’t stop the hit sensation Amy Winehouse, her mega selling album from 2006 Back To Black has hit the Official Top 40 Album Chart once again just after eight days of being deceased! Her first album, Frank, was at five while five tracks made the Official Singles Top 40 after a surge of record sales for the singer who was cremated on Tuesday the 26th of July. Back to Black’s title track, at number eight, was her highest-placed single. In the US, where she won five Grammys for Back to Black, the album was at number nine in the Billboard 200.

Before her death Amy was determinted to change her ways after realising that her life was going down the drain so she decided to contact the addiction medication specialis, Dr. Drew. According to Drew, late songstress Amy, who tragically passed away at the age of 27 last Saturday, had been in touch with him in a bid to receive help combating her addiction issues. The cause of Amy’s death will not be known until toxicology tests come back in around four weeks, although she had famously battled with alcohol and drugs for a long period. Drew claims he would have loved to help the hugely talented star, although only discovered her call for help when it was too late. “Believe it or not she was trying to contact me,” he told KROQ L.A. radio hosts Kevin Ryder and Gene ‘Bean’ Baxter. “We could have maybe gotten her over here to someplace really good.”

Unfortunately all we can do now is let her spirits live on in the lyrics of her songs and admire the part of her that we have left. To listen to Black to Black just click here and also click here to listen to Rehab.