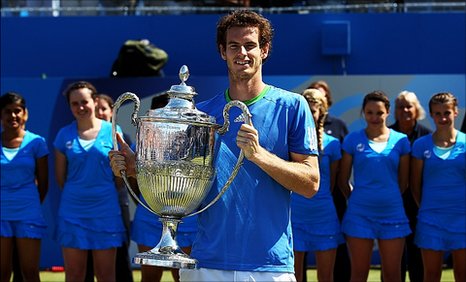 Andy Murray won the Queen’s Club tennis tournament earlier today after the final match was postponed due to yesterday’s grim rain. Another Brit, James Ward, ranked 2nd in Britain but 216th in the world also reached the semi-finals, after qualifying by wildcard from failing the qualifying rounds. Also to note, James has competed in the longest tennis match in history, lasting a whopping 6 hours and 40 minutes!

Andy had also won the tournament in 2009 winning with 3-6 7-6 (7-2), 6-4. This means that he won the 2nd two sets, and after reaching a standstill at 6-6 they played with games, rather than points, leaving him to win 7-2. The spectator arena was completely full, mainly from new ticket holders as any previous tickets for Sunday were void, of 6,858. Over another thousand came to visit from a second space, much like Henman Hill at Wimbledon.

The opponent beaten was Jo-Wilfried Tsonga (pronounce Song-ga), who played well and even cancelled Murray’s signature trick shot, obviously quite embarassing for him. He is one of France’s best new tennis players, and experts hope that he may be a rival for other world-class players. It took Murray almost two hours to break Tsonga’s resolve, but his strength is to ace other players, scoring a point with the serve. Andy even tried a trick shot on the penultimate game, scoring it to make it 5-3. This proved he was so confident he’d won, that he wouldn’t even mind losing that point.

There have only ever been two Monday winners of the Queen’s Club tournament, now Murray is the 3rd. The other two were Boris Becker in 1987 and John McEnroe in 1979, and both of them went on to lose the world-famous Wimbledon. But that isn’t a worry for Murray, and he has confirmed rumours that’s expecting to be in the final at least!

Would you like to win Queen’s? What would you do with the money? Should Murray have lost to Tsonga? Leave your views below!