Recently, Sulake have been keen to separate “norms” from HC & VIP users. This report will examine when, how and why this is happening. 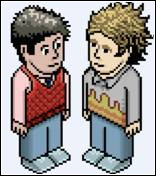 Originally, when Habbo was first released into the world, paying for extra features was a luxury for those with money. Having 100 credits meant you were a millionaire. But now, with today’s youth becoming richer and richer, currency is so commonplace that being rich doesn’t even mean being rich anymore.

Undoubtedly the most popular paid feature in the Hotel is VIP. Each month, you can choose to pay 25 credits (roughly £3 or $5) which grants you many bonuses:
A large expansion on how many articles of clothing you can wear;
Almost 2.5x the colours you can put onto these items;
2 free furni each month from a special catalogue;
A wardrobe which can store 10 outfits for later use;
Nearly quadruple the amount of friends (1100!);
Special badges for membership;
8 new room layouts;
3 extra dances.

Whew! What a long list of seemingly-perfect features for a relatively low price. However, this has led to many VIP users disregarding others’ Habbos, with no thought of how long they have been a member. If you can’t afford VIP, you might be called poor, a noob, a norm or even told to get off the Hotel. This is not fair, simply because you may not want to pay money for a virtual game, or that you aren’t in the financial situation where £3 is available.

Sulake are keen to get users to pay, it seems. But this is not alien! Many other services on the internet exploit users with catchy slogans and regular updates. When you click onto their website, you get bombarded with messages that you need to pay to experience such “wonders”. The average user feels inclined to buy, as the product offered looks fun, interesting or just simply because it is something new. This is how advertising in general works, and it really does work! Addictions to both online and real life things are becoming much more usual, and there is a large problem combating it.

Habbo, when first created, was a place of equality, where more or less everyone got along. Users old and young played together, creating a happy environment for those as young as 11 to be in. Recently, this has turned sour, and many communities on the Hotel request that members “keep up appearances” by buying VIP. This selectiveness was inevitable, and it feels like Sulake has imposed it.

Now, being a “norm” is a perfect insult to a proud VIPed Habbo. Should that be allowed, at all? Should having money mean superiority in an online game? Should someone put a stop to this maniacism? Leave your thoughts below!