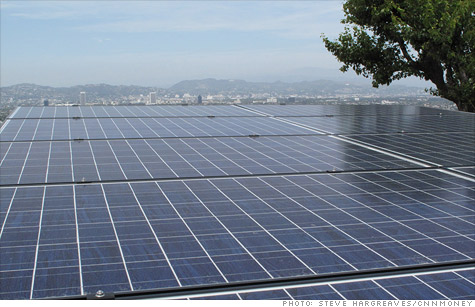 Google have decided to invest a gargantuan $280m in SolarCity, a Californian-based solar power company, to provide many thousands of homes with solar panels over the 10 states that they already provide solar arrays for. This deal is the largest home-based solar power project in the US, another record broken by Google and their $57.8b empire, encompassing YouTube and On2 Technologies, amongst many others.

SolarCity are much smaller in comparison, even if they are an amazingly successful solar company. They formed 5 years ago, and n 2010 they acquired Building Solutions, a software-enabled home energy firm and began to add home energy audits to their list of services. Currently, they employ 950 people and have put up over 15,000 solar panel sets relating to houses alone! They work by installing solar panels in their own land (controversially NOT on the buildings themselves) and then charging the investors 10%-20% less on their energy bills. This method is different to most and some critics say that it is much less effective than the usual way.

Together, they should be one of the strongest solar power companies in the western world, Google being the most valuable computer software supplier and SolarCity already the biggest solar panel group in America. Google have already tried renewable energy investments, such as last year’s wind power backing. Many experts think that this venture is quite small but profitable for Google, but others contradict this and say that the style of development isn’t worth the risk, and is unlikely to work.

What are your views on this partnership? Should Google be minding their Ps and Qs? Or is this kind of investment good?