An over-zealous cleaner has ruined a $1 million piece of artwork because it looked un-clean. 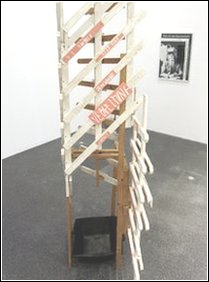 An art installation worth more than $1 million (£624,000) was ruined by a cleaner who deliberately scrubbed away a patina. The patina was meant to resemble a puddle underneath a tower of stacked wooden slats but was mistaken by the cleaner for a ‘puddle of dirt’.

Dortmund city spokesperson Dagmar Papajewski said that it hadn’t been decided whether the patina would be restored. They cannot consult the original owner/creator of the artwork (Martin Kippenberger) due to his death in 1997, so the private collector will need to decide whether the patina is to be restored or not.

Ms Papajewski told the press that the company who employed the cleaning staff have been working with the museum since October last year and had informed their cleaning staff to stay at least 20cm away from the painting. However, it is believed that the cleaner who damaged the artwork didn’t receive the memo stating they had to stay 20cm away from the painting.

Martin Kippenger was a fairly well-known artist who produced work in a wide range of styles, such as: