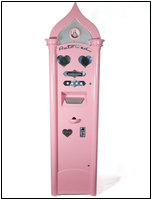 Fancy getting married? Completely broke? Here’s the perfect thing for you – and I don’t mean Habbo chapels!

Straight from a small Cornish town, there’s a new machine taking over the world! There has been a great deal of interest from around the world for this new novelty wedding vending machine, made by a small company in Cornwall.

Named ‘Autowed’, it is an 8ft (2.4m) tall pink machine, which looks similar to a parking meter (but painted baby pink…). It has caught the imagination of people around the world after a video was posted on the internet. In a recent press release from the inventor, Concept Shed, he revealed that ther have been requests for these machines from as far away as Russia and Brazil.
For only £1 it plays a specially composed introduction version of the wedding march and asks customers to select their type of union.There are two options for the bride and groom – of pressing one button on a keyboard for “I do” and another for “Escape”.
Users of the machine a wedding receipt and two plastic rings in an egg-shaped plastic capsule.
Other inventions by Concept Shed include an animated Frankenstein. Look out for a wedding vending machine, coming to a city near you!