A beast from the deep… 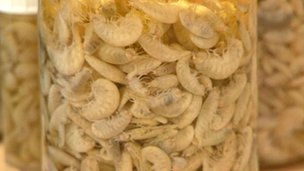 A huge crustacean has been discovered (by teams from the University of Aberdeen and the National Institute of Water and Atmospheric Research) lurking 7k underneath waters off the coast of New Zealand. The creature is known as a ‘supergiant’, a type of amphipod which is usually 2-3cm long. However, the largest of these crustaceans found was over 10 x the regular size (of 2-3cm) – measuring in at a massive 34cm!

Alan Jamieson described it as “being a bit like finding a foot long cockroach”… I certainly wouldn’t want a foot long cockroach in my kitchen (or pond considering the crustacean lives underwater.)  The ‘beasts’ were caught using a large metal cage which contained a camera inside, meaning the teams managed to get a recording of some of the crustaceans under the sea. The largest filmed was 34cm long and the longest caught was 28cm long.

Amphipods have been found before living in large numbers at the very bottom of ocean trenches, deep, narrow valleys in the sea floor that can plunge down to nearly 11km.
The creatures are small, but extremely active, and seem to thrive in this place where the pressure is one thousand times greater than at sea level. Before today, the largest amphipod found was only 10cm!

Dr Ashley Rowden sums this article up perfectly; “It just goes to show that the more you look, the more you find”

If you’ve got a comment for this article, why not place it by clicking ‘Read More & Comment’!