The third issue of the Habbo whenever-ly Behind the Pixels has been released! 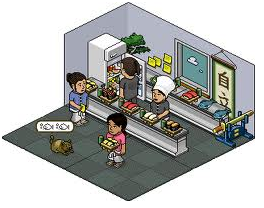 You might not be able to guess from that picture, it isn’t really clear what’s going on in it. However, the katana in the corner and scroll painting on the wall may have led you to a Japanese theme! And right you would be! Yes, this time he’s looking at the Kitsune campaign of 2008, and he has 10 trivia facts to give you. We’ve only picked the best, of course:

1.) In the Japanese wall posters, the text was actually reversed. Luckily for them, the Japanese Hotel Manager caught the mistake saving a lot of panic.

2.) In its full entirety, the Kitsune campaign spanned 50 pages which was intended to last about 6 weeks. Roughly 80 rooms had been created for it, and Mark himself feels that was a bit too much…

6.) Kitsune was originally based on Japanese anime works, particularly the character of Haruhi Suzumiya. In previous times in her life, she was a time traveler and worked with robots.

And possibly the most interesting thought of all, number 10:

10.) On the release date of this Behind the Pixels, the campaigns team had been speaking about a Japanese-style promotion soon. We could be seeing some kimonos added to the clothes section or some oriental wallpapers for the catalogue. Who knows!

To find the entire magazine click HERE. It’s a PDF file so you need to download it first. What did you think? Were you one of those taking part in this story of May 2008? Or were you just watching from the sidelines. Leave your thoughts below!