It’s been two weeks since Lisa’s parents got divorced and she was forced to embark with her dreamy father on yet another of his interstellar missions. As her organism is not quite ready to cope with events of these proportions, our heroine finds herself in constant reveries, whenever she looks at that little bright spot outside the window…

Playing the omnipotent creature was one of Lisa’s pastimes. Finding herself in an absolute period of inner hassles and boredom (her father was on the outside, adjusting the central satellite that will probably establish the final radio signals from the Betelgeuse supernova, saying something, like “We are coming, Gorillas!!!“), she still does not understand very well why has the separation of her parents made her intrinsically inclined to live with her father, instead of living with her mom, at Earth, Gibblon, 7243 Carpenter Street, playing with a bile-coloured hose and – most important of all – classmates whose intelligence were higher than 100 IQ, made of flesh and bones. Up to the present time, the holographic friends that her father had thoroughly designed for her (and obviously to fuel his own satisfaction of constructing things that know how to speak HELLO, HUMAN after pressing a green button located behind the nape of their necks) were not interesting enough. What kind of 11-year-old human from Earth would spend so many hours openly arguing about hybrid genres (with occasional advertisements while they stop to breathe)?

– Why do not we play Uno while this meteor shower goes on?

– Let’s start over, Ashley. My name is Lisa and I have administrator rights to set you up so that you are one of my closest friends. What do you usually play?

– SPECIAL OFFERS FOR THE FIRST 15 PEOPLE CONNECTING TO FLOWER-PLAY, THE BEST DISTRIBUTOR OF HANDMADE WOOD VASES FROM THE SECOND HALF OF MILKY WAY. YELLOW, RED OR BLUE. IT IS NECESSARY TO ADDRESS BOLT SIGNALS TO [email protected] CL… 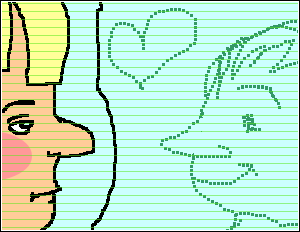 Another failed attempt at communication. When available to her, Lisa’s father often says that there is a combination of keywords that would make a human-hologram conversation much more natural and interesting, but finding such words would only be possible if he opened the circuit boards and read the manual that he accidentally forgot in there… and he is too busy saving the galaxy – one more time!

Now, even if for a single moment, it’s just the two of them – Lisa and that tiny blue sparkle – far beyond the strong window made out of neotempered glass. She fairly thinks it’s Earth, but it’s hard to tell as the universe is so… reddish, for some reason! Is it an illusion?

Situations like these make our Lisa think a lot, in a way she has never done before, as if a tragic clown had appeared in her pink room inside the N00DLE-ship and put on her nose a bag of helium gas (and only God knows what else) and made her get those sudden but pleasant daydreams… Perhaps it is just those space pills that ridiculously try to copy the turkey seasonings that her grandmother used to prepare, which her intestine refuses to accept fully…

Looking at the Earth from such a distance makes me reflect on many things I had never thought of before, on the extreme lines of our complete insignificance (but, thinking well, Daddy said that no living being is insignificant …) and how human intelligence has so far compensated for our relatively small size and made it possible for us to rearrange the full extent of that green and blue ball in a way that we could do a multitude of things, such as time traveling, matter generating and… spaceships, as the one I’m in, which makes me see Earth at such a long distance … so that its entire extension gains the inviting and funny shape of a single house… no, an anthill… so fragile that for a moment it is as if it could be completely malleable by my own hands, right now – heh!

Opening her eyes, Lisa was startled to realise that in some way she did not know, she was cutting through the immensity of outer space, floating alone in the purest pitch, unless you considered the spot of terrestrial light now located much closer than before. Ignoring the logic and the fact that she was breathing oxygen despite only wearing her lemon-coloured dress, she floated forward, as if she could reach the surface of the blue planet only a few seconds ahead… and that was what happened!

Perhaps because of lack of time or a moment of neglect, her father had NEVER mentioned to her about the fact that, thanks to the theory of relativity, humans grow in size to a degree of kilometers as they progress toward interstellar treks, and… now… thanks to a simple stumbling on the satellite that was exhibiting cartoons entertaining thousands of Japanese children (the Sun is shining on the far east side), the whole of Tokyo has been destroyed by her knees.

Desperate, Lisa quickly unscrews her leg from a place where people would probably be drawing thousands of manga, traveling by train with those announcers saying “Mamonaku”, and cycling on those so-clear streets. She feels a heat in the bones that makes her laugh a little. Is it because of the volcanoes?

She watches a few fragments of matter flying through space and finds that the flock of objects (like ants) are the Japanese themselves, and then has the idea of closing in to examine the victims one by one in order to apologise them for destroy their homes. She calculates that Tokyo had about 5 million people, so she programs her cell phone (even though she does not remember having taken it from her backpack) to reproduce a female voice sounding “I did not mean it!” nine million times at full speed.

The heat of the sun, now so close to her “little head”, made crazy ideas grow inside her. As if to justify the act, Lisa closes her eyes as she puts her fingers in the oceanic regions of the Earth, where there were certainly far fewer humans than on land, and begins to shake the planet, slowly, as not to hurt anyone in it of that nitrogen layer. Her attempt to be gentle failed miserably, and suddenly a scary mass of humans began to be tossed out of orbit. This makes her increase the number of loopings to her voice audio file to: three billion times!!

Knowing that now the Earth is completely uninhabited and the turmoil made its whole surface washed with the drops of its own ocean, Lisa feels a little hungry, mainly because both her body and her stomach began to grow a little more, so that the planet was the exact size of a lemon bonbon. Without thinking twice or feeling the slightest remorse, she puts all the contents of the spherical matter in her mouth, and for a moment she thinks she is eating some sort of food that had all the flavours of the world on it. And, in a way, that was exactly it. Paradoxically, the warm occasionally becomes cold, the good turns into bad and the bitter sweetened after two bites. Indeed, it resembled a little the roast chicken she ate last week.

After swallowing, she thinks about all the seeds, plants, and microorganisms of various species that were still to exist in the world and she thought she owed something to them. After an improvised calculation, she increases the number of repeats in the playback of her audio file to three hundred billion and buys the premium version of the application for a higher playback speed.

Bored, Lisa decides to reach Venus, which is not far from where she is. But her body did not move anymore. It is kind of stuck in something; upon examining her back, she sees that the Moon still is connected to Earth (now, next to Lisa’s liver) and its gravitational power prevents the girl from advancing into the “air”. It is the most terrifying thing in the world, indeed, it feels like a nightmare. She imitates in vain swimming movements on the pitch black without oxygen to see if she is able to move a few miles, but has no success. She also feels something growing inside her, a very funny inner heat but also quite painful, like the result of a failed Tumo meditation training (ss a matter of fact, the only thing she remembered before she died of apnea was the wonderful flashes of volcanic lava coming from her ears and a pink spaceship flinging laser beams that tickled her belly but did not make them laugh!)…

“Wake up, baby, it’s time to start your training!”

And it was really a nightmare. Even motionless… Lisa can feel that her dress was drenched with sweat (which now floats in the gravitational field) and her breathing seems very agitated. It is not the first time that such a situation happens, but it is precisely in these moments that she feels entirely comfortable hearing the monotonous noise of the internal engines. The universe looks now even more reddish, seen from the spaceship windows, but it probably is just an illusion caused by the light bulbs. She is ready for another day of survival training and turns to say good morning to her father, who at last seems to have given up his projects to devote his rare attention to his crazy daughter.
But to her disbelief, instead, she sees a smiling gorilla with a “Welcome To Betelgeuse” sign. It would be one more of THOSE days…