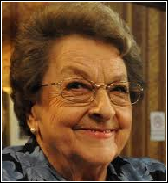 Known nationally for pulling pints in the Rover’s Return, which graces the ITV screens on weekday evenings, since 1969 (that’s over 40 years of beers), she was only hired for a 3-month casting. After performing for nearly 80 years, and suffering from pneumonia, she has sadly passed away peacefully, spending 6 weeks in hospital in a deteriorating condition. She was awarded an MBE (Member of the British Isles) for her services to entertainment and television.

Although she is recognised best as loving Betty Driver, pictured to the right, in her youth she sang and acted professionally in the theatre, forced to miss out on her childhood by her mother Nellie. She originally auditioned for the role of Hilda Ogden in the show, but accepted Ms Turpin (her birth name) instead. This proved a wise decision, as she has appeared in more than 2,800 episodes of the show, more than a third ever commissioned!

She told the BBC that she would never retire, and “…they’ll have to shoot me to get rid of me. I just love people, you see, and I love the cast.” Many fellow actors and actresses believe that she was the foundation of the Rover’s, the local pub, much like the Queen Vic in Eastenders or the Woolpack in Emmerdale, and that without her, neither the show nor her colleagues would ever be the same.

Our hearts are with her friends and family in this sad time, and we are sure that all of Coronation Street’s viewers feel the same. Please leave your messages of support below.