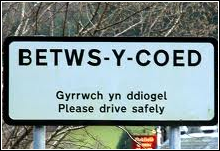 Kevin Jones, the manager of Betws-Y-Coed’s website, conducted a study during 2011 to check the variations of the town’s difficult name searched, and the total results ended up at 364. This figure is nearly one new spelling every day! Considering only one can be correct, this is a very extreme figure. Take London, for example. How many ways could you spell it wrong? 10? 15? And millions of people a year search for London. Betws-Y-Coed is much less known, yet has many more incorrect searches.

Mr Jones expected a possible 30 to 40 variants, but had no idea that there could have been that many. However, a large proportion of the names had few searches, between 3 and 7. He joked “I’d like to know if any other place in the UK is as misspelt.” with reporters but also gave them his rules for accepting searches “But my criteria for counting the misspellings was that at least three people would have spelt it that way – and that they had viewed pages on the website after using them.“

And spelling it isn’t the only hard part! Another survey given to tourists last year showed that nearly 80% could not say the name accurately, and Mr Jones himself got it wrong when he first visited the town! Many residents like to humour themselves, playing with the tourists’ pronunciation. Since then, he has encountered “dozens of different spellings” in letters and emails.

He believes that it isn’t just common stupidity “I think part of the reason for the mistake is historical. People have spoken to each other giving it the wrong name for a long time – Betsy-Cowed.” There were many unlikely spellings, and some of my favourites are below:

The correct, hyphenated version had nearly 9,000 searches in 2nd place.

What do you think? Are you perplexed as to how to say it? I certainly am! Or are you one of the unfortunate residents bored with all the incorrectness? Do you think it is harder than Llanfairpwllgwyngyllgogerychwyrndrobwllllantysilio-gogogoch? Leave your thoughts below!