Although we’re not quite sure what ‘It’ is, we can confirm Beyoncé definitely still has it! 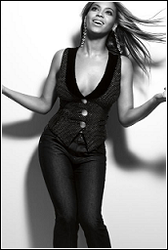 During a 2010 interview, Queen of Pop Beyoncé announced that she would be taking a break from music for 6 months to focus more on her life. Only 2 years previous to this she had released her 3rd chart topping studio album called ‘I Am… Sasha Fierce’ which included the hits ‘If I Were A Boy’, ‘Single Ladies’ and ‘Halo’. She’d been focusing quite heavily on promoting the album, with a world tour lasting 11 months and generating $86,456,252 from ticket sales. As well as working on her acting career with the film ‘Obsessed’ being released.

Her loyal fans have waited anxiously since then for a new album from the star, only being teased with features from Beyoncé on other artists’ singles. Finally on June 24th  2011, her 4th studio album, entitled ‘4’ was released. The lead single, ‘Run The World (Girls)’ only managed the 29th position on the Billboard Hot 100, but it jumped up a few places when the video was released. It’s still her lowest charting single to date. However her second single, ‘Best Thing I Never Had’ reached an impressive 3rd place in the UK Charts.

Beyoncé’s record label Columbia had voiced concerns previous to the release of ‘4’, stating that the album didn’t contain enough hit songs to be well received. This was when the lead single ‘Run The World (Girls)’ hadn’t done as well as they’d expected it to. They had even asked Beyoncé to record some new material but she’d refused, and quite rightly too, as the album has raced to the top of the charts, knocking off Lady Gaga’s ‘Born This Way’ and Take That’s ‘Progress’. It’s thought that her 90 minute performance at Glastonbury had helped to increase album sales, as other artists’ who performed at the event have also had their albums boosted up a few spots.