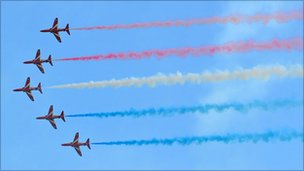 A red arrow plane has crashed in dorset during the Bournemouth Air Festival. The fire service have confirmed that the plane was downed at around 13:50 BST, not far from Bournemouth International Airport.

It is not yet known weather the pilot survived the crash, but we hope there were no fatal casualties during the incident. BBC South Today producer Martin Webster said “it was thought to be the RED 4 plane that crashed in an open area at Throop village, near the Castlepoint shopping centre.”