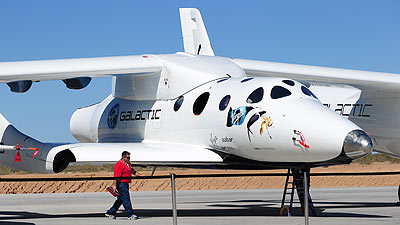 Richard Branson has launched his first space station in a massive step forward in Mr Branson’s dream to launch a vessel into space in what is now the next 11 months. The space station is the first commercial space station launched.

It will be the home to two “White Knight Two’s” and five “Spaceship Two’s” as well as Mission Control and all of Virgin’s astronaut preparation facilities. The new site has been named Spaceport America and is located in the New Mexico desert.

Over 150 have already pre-booked the first flights, and with little under a year to go this is expected to rise. Famous guests at the launched included second man on the moon Buzz Aldrin! I wonder if he’s booked his ticked?

Branson said that an hour between LA and London is now seeming to be a little more realistic, however this will not be able to be done for many years. He opened the space station by absailing the builing and smashing a champaigne bottle on the side off it.