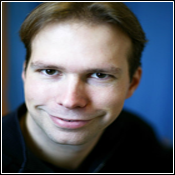 Earlier this year Sulka Harrow who was Sulake’s lead designer decided to leave sulake for upcoming gaming and electronic toys design company MakieLab, which you can read about here. Today, Stefan Hauk who was Sulake’s software architect (The guy who fix’s bugs and deals with the technical things like server errors.) has left the business, but Habbox have no further information on where he plans to go next or what his plans are for his future. Hearing the news of Stefan leaving… Habbox decided to treat Stefan with a little leaving tweet. “@jordekorre Good luck to whatever you are doing in the future!” and Stefan the then replied with “@Habbox thankyou! It was nice being part of this community” If you would like to see the image of this short conversation, you can do so by clicking here.

Stefan attended the University of Passau where he studied Computer Science from the year of 1993 to 2003 where he passed with a 1.4 which is very good. After graduating from University, Mr Hauk joined EurActiv as an assistant IT director where he was involved in developing a content syndication solution and make the portal ready for access to users of many different languages. It was then in 2004 where Stefan joined Sulake as an Java Developer. He was then promoted to the role of Senior Java Developer in March 2005 and 9 months after that, he was promoted yet again to a much bigger role of an Software Architecture and worked on Sulake wide range of virtual multiplayer games like The Bobba Bar, Virtual Magic Kingdom and of course our favorite Habbo Hotel.

All in all, Stefan has been working with the Sulake team for 90 months which is the equivalent to 7.5 years, which is a very long time. Habbox would like to thank Stefan for all his hard work with Habbo because we’re sure that if Habbo didn’t have somebody monitoring the servers Habbo wouldn’t be the large success it is today meaning Habbox wouldn’t be the fansite it is today. We’d also like to thank him for replying to us via twitter.

What are your views on Mr S.Hauk? Let us know by posting them below!