A sad day for Motorsport as British Racing driver and father of two, Dan Wheldon, dies in Las Vegas after a huge pile up in the IndyCar Series.

Dan Wheldon moved to the United States after living in England to race. He was described as a “Born racer” and “left us doing what he loved“. It has been said that Dan lost his life through fatal head injuries after being rushed to hospital via air ambulance. 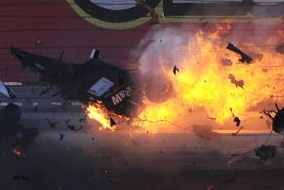 The crash worsened as it went on, more and more cars became involved in the pile up and we were very luck that noone else was critically injured. My heart goes out to Dan and his family. People are now describing the Las Vegas track that Dan was racing on as “a recipe for disaster“. Mr Wheldon was an inspirational person to anyone, he was a true champion on and off the track and was loved dearly by his family and they have said he will be dearly missed.

Jenson Button published on Twitter: ‘Just woken up to the most horrific news. Dan Weldon RIP. I have so many good memories of racing with Dan in the early 90s, a true fighter. We’ve lost a legend in our sport but also a great guy.’  Along with Jenson, many other legendary racing drivers have paid their respects and comented on what a great guy Dan was and how sorely he will be missed.

During the race, Dan Wheldon managed to push himself up 10 places to secure a victory and win the $5 million prize money which was said to really help to support his family. Dan Wheldon was the only racer to accept the $5 million race offer.

He was a fantastic racer and it’s a sad, sad way to see somebody go however, it was whilst he was doing something he loved which is all anybody could ask for.

For more picture of the crash, read the full story.