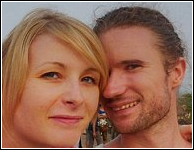 A body has been recovered by police in India who have been searching for missing British woman Christina Reed. Miss Reed had been swimming in a romote river when she was swept away by strong currents. Miss reed, who was twenty five, was swimming in the Umkynsan River in the state of Meghalaya on Saturday, with her boyfriend Anthony Biddlecombe, when she went missing.

Twenty Eight year old Mr Biddlecombe has told rescuers that his girlfriend jumped into the river after him for a swim, but was dragged away by the strong current. The river was swollen after the monsoon rain. The couple had teaching jobs in Chiang Mai in Thailand and were traveling around India while on a break.

Miss Reed, who originally came from Torquay in Devon was an English teacher and Mr Biddlecombe who was originally from the Isle of Wight, was a lifeguard and swimming instructor. Mr Biddlecombe told rescuers that he tried to save Miss Reed but failed when she was swept downstream by the current.

Sunil Kumar Kataria who is a local police officer, said the area was hilly and dangerous and that due to the heavy rainfall, the water level had risen alarmingly. It was reported on the Meghalaya Police website that Miss Reed had drowned and her body had been found at about 2pm on Tuesday. A spokesman for the British Foreign Office said that they were aware that a British national had been reported missing in India and that the local authorities were investigating.