Since 2010, over 200 room bundles have been released into the catalogue – many of which have been released a second, third or even fourth time. This has often been a point of contention with some players, and opinions are often split on whether these re-releases are a good idea, or just bad news.

So what’s the verdict? Are bundle re-releases a welcome part of Habbo campaigns or just a waste of time and credits?

“Read more” to explore the world of re-releases!

One of the good things about Habbo is its aura of nostalgia; players that stopped playing the game many years ago are still returning. Not only are older players coming back to the Hotel, but new players are always checking in!

The re-release of older bundles gives returning players and brand new players the opportunity to purchase these items that they may have missed out on. This is especially applicable to bundles that include exclusive items; some of these items often become rare and are sold in the Marketplace for extremely high rates, which often means new or returning players have little to no chance of owning them.

For example, when I first returned to Habbo I thought it would be a QUACKING idea to own and wear a Duck Hat; being MadameJaquack, it seemed like the natural thing to do. However these lovely yellow monstrosities are valued at 110c*, after being exclusively released with the Jellybean Jungle Bundle. This is still a lot of coinage to me now, and of course when I first returned to the hotel I definitely did not have that much, in fact I had nothing.

I still don’t own it because I’m far too frugal to spend that much on an ugly hat but what I do own is photoshop, so in a way I can still live out my dreams.

Photoshop aside, another way I could live out my dreams of being the most Quacking Jaquack on the block is by buying the Jellybean Jungle Bundle that this hat was exclusive to – as the bundle itself (along with the hat) has been released a staggering FOUR times since the original 2014 release!

When discussing the re-release of room bundles, or any other items, the question of “why?” can easily come up. Is it possible that Habbo re-releases these bundles because they’re lacking new content to release? Or is it purely based on which bundles have been more popular?

Regardless, the reappearance of older items can easily be received poorly by players based on how the Hotel, and the economy within it, has changed since the previous release of such items.

For example – the Easter Garden Bundle. 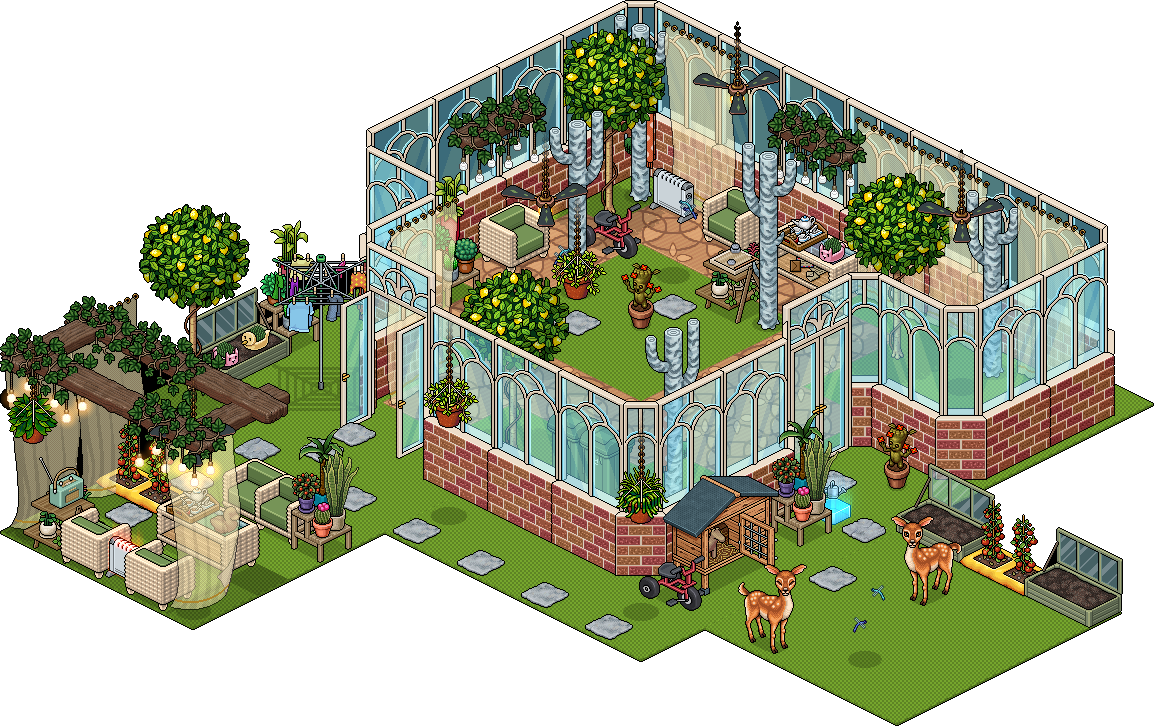 This bundle was first released in March 2018 for the campaign of the same name. At the time of its first release, the items included were newly introduced as a part of the Easter Garden campaign, making the bundle a popular purchase.

In the recent Easter campaign Habbo Fashion Month, a gift calendar was launched in-client through the month that gave players free previous Easter furni every day; including the Easter Garden items. The Easter Garden Bundle was also re-released in April during this campaign. This understandably caused some upset and confusion with players as the campaign also the bundle was sold for its original price of 199c, despite a majority of the items it included being handed to users for free.

Although the intention behind the re-release of room bundles is to re-release older items into the catalogue, on occasion these re-releases include new exclusive items. This often offers a new addition to a themed bundles that are already players’ favourites.

Although it could be seen as a positive opportunity to expand an already beloved range – would it be best if these items were released individually?

However, while some may view the re-release of these exclusive items as a chance to grab more of their favourite items, or an opportunity to finally own that one piece of furni that has been on their wish list for the LONGEST time – many users, mainly traders, see this as a negative. The persistent re-releases of exclusive items continues to decrease their rarity within the Hotel; subsequently decreasing their value.

Let’s use the example of the Paparazzi Camera:

The Paparazzi Camera was initially released in March 2016 exclusively through the purchase of the three conjoining Runway Bundles. Following the bundles’ first re-release in June 2019, the value of the Camera significantly dropped from 600c to 150c*. Over a year later – in October 2020 – the item was valued at 550c. However, the recent Habbo Fashion Month campaign saw another re-release of these Runway bundles, following which the Paparazzi Camera once again plummeted to a value of 140c.

In this particular case, the re-release makes sense: the exclusive items were already popular among players, and the theme of the bundles matched the theme of the campaign. While this could be great news for collectors who are missing the item, and users who have always longed to wear a lovely camera around their pixel neck, people already in possession of the camera could potentially feel a bit disappointed – especially those who may have bought it from the Marketplace when it was valued at 600c.

And now as our journey comes to a close, we come to the most important part: MY OPINION.

I find it understandable that people are often upset with these re-releases; the persistent release of older items over the introduction of new content can be frustrating. I think the re-releases are definitely a bonus! As an older player myself, who recently returned to Habbo in October have a 10-ish year break, it’s a luxury to now be able to purchase items within the Hotel that I couldn’t afford before, or missed during my absence from the site.

That being said, I do think that there should be an increased focus on producing more new content rather than constantly releasing the older stuff. In March, no new room bundles were released, instead nine older room bundles were re-released. Although many of these included new exclusive items, it felt as though there was a lack of enthusiasm around the campaign that was potentially caused by a lack of new additions to the Hotel. In this current campaign, a brand new bundle along with new pet habitat bundles are being released alongside a few older re-releases – I really think this is the way to go! To release new content to keep the community engaged and excited, as well as re-releasing older content that a portion of player have perhaps never seen before!

How do you feel about the re-releases of room bundles? Do you like the opportunity to purchase exclusive items you may have missed? Or do you think they’re more harmful than good?

Leave your thoughts in the comments below!

*All values are taken from the fabulous Habbox Rare Values Page.

I like rereleases because it typically means something going temporarily into BC too, and also the rage of people who’ve not realised yet that “exclusive” items can still be released at any time

thanks for your effort and time for this article

The paparazzi camera was worth around 2k coins before the second rerelease of the runway bundle!! Anyways, I like rereleases of bundles that cost coins + diamonds especially if they have an exclusive clothing in it!! Cause I can usually buy the exclusive items 5x cheaper than when the bundle was first released! :}

What a nice article, anyway I like that the rerelease of bundles meant I could finally have the inmate overalls