You would think that if Justin Bieber’s face was to appear on a magazine, they would sell millions of copies right? Wrong! 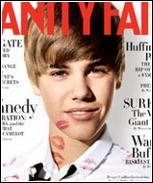 The February 2011 issue of Vanity Fair featured a picture of Justin Bieber on its cover, the amount of copies of the issue sold was a record low. It sold the lowest amount of copies than any other issues in the past 12 years! Only about 246,000 copies of this issue were sold compared to the usual average of 342,000 copies. This wasn’t the first time though, the October 2010 issue of Teen Vogue, which also featured a picture of Justin, sold 12 percent less copies then the magazine’s average. The words, “worst” and “seller” aren’t two words you expect to be in the same sentence, if they were talking about Justin Bieber, as he released one of the best selling albums in 2010, and one of the best selling concert movies of all time. This even shocked me as I read it.

In his issue of Vanity Fair, there was an interview between him and a Vanity Fair reporter, in which he talked about Michael Jackson and being a normal teenager. But since Bieber updates his fans about what he is doing via Twitter, they won’t care about any interviews with him unless they include sexy pictures, or something of that nature. So, I want to know if you would have bought this issue of Vanity Fair, tell me by commenting below.