What has probably been the most anticipated video from 2010’s X Factor has finally arrived!

There’s been lots of discussion and talk since it was revealed that 2010 X Factor contestant, Cher Lloyd had been signed by a record label and was working on her debut album. Originally she became a hit with the X Factor viewers after her rendition of Keri Hilson’s single, ‘Turn My Swag On’, impressed the judges, and was tipped to even win the competition. However as she progressed she began to lose followers and was frequently booed during the Live Shows. She finished in fourth place and since then has been keeping quiet about her album. 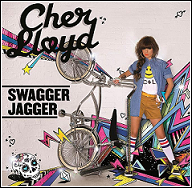 After a preview of her single, ‘Swagger Jagger’ was released on Youtube and received negative feedback; she released a preview of what she described as the ‘finished version’ on her official channel. This past week she’s been teasing us with 10 second previews in the countdown to the release of the video. Yesterday Cher’s video finally made its debut, and since then has racked up over 200,000 views and over 10,000 dislikes compared to the mere 7648 likes. It seems that the general public still do not like her, or her music.

In the video Cher is seen walking down the street with a radio in her hand, before it expands into a loud speaker and begins to blast out her song. She then jumps straight into her first verse and is accompanied by her backing dancers. Throughout the video she’s occasionally seen in front of a wall of speakers, looking very similar to her X Factor mentor, Cheryl Cole. The song is quite upbeat and the video has lots of cartoon images to accompany the words of the verses, many of which address her ‘haters’. It’s not sure when the song will be available for download but the album is said to be released in September.

What do you think of Cher Lloyd’s new song?