A 2 year old Chinese girl has died after being involved in a hit and run accident. 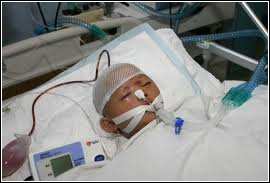 Doctors had already said that Wang Yue (the toddler that was ran over) was already in a coma and had an unlikely chance of surviving. She died 8 days after the incident occurred.

The footage of the incident, was shown on public television and quickly spread around the internet, including many Chinese sites. This led to many people questioning the state of Chinese morality and the Chinese law – the Chinese government is currently considering whether to introduce a new law to stop incidents like this, getting out of hand.

At the incident, only 2 people attempted to help the child – first was a rubbish collector who moved the child to the side of the road in order to stop her being run over even more. Second was an elderly woman who was rooting through the trash, she spotted the child and immediately rushed over to help the child. It is not yet known why the child was on her own.

We will not be placing a video of the incident, due to its inappropriate and disturbing nature!

A nice way to sum up this article, would be a ‘R.I.P. comment’ which someone posted online – “Farewell to little Wang Yue. There are no cars in heaven.”