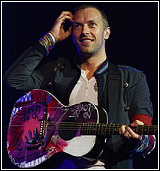 The legendary and well-known band Coldplay have returned from their brilliant show on Saturday night at Glastonbury to release a brand new video for their amazing hit, ‘Every Teardrop is a Waterfall‘. They have also released a CD, limited edition 7′ blue vinyl and two digital bundles off their new single which include two other songs!

Coldplay‘s video is quite entertaining and different from their videos in the past, it shows the artistic side of them and you can definitely hear that kick bass drum in the background that gets you dancing. The other two beautiful songs, ‘Major Minus‘ and ‘Moving to Mars‘ are just as good, the three songs are meaningful and just simply great.

Many people who attended Glastonbury would say that Coldplay played amazingly. Chris Martin‘s voice projected into thousands of people’s ears and amazed them all with their old songs, new songs and the chart favourites! All you have to do is click right here for their performance of ‘Every Teardrop is a Waterfall‘. Also click here for the official video, here for ‘Major Minus‘ and here for ‘Moving to Mars‘. Enjoy!