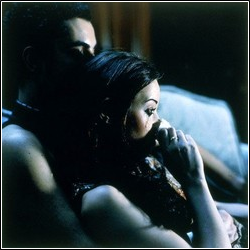 A tear slowly slid down her cheek, but she didn’t have the energy to brush it away. A tremor wracked her body like an earthquake.
Yet it felt like it was all she could do. It felt as natural to her as rain falling from the sky.
And if she could describe the feelings that were coursing through her soul, there would only be two: fear… and loneliness.
The man heard a quiet sobbing coming from somewhere outside his body.
He knew what this was.
Getting to his feet, he quietly left his room, and made his way over to hers.
He didn’t bother knocking on the door, he just picked the lock and entered the room.
And immediately crossed the floor, and gathered the shaking girl in his arms.
She didn’t want to be alone.
She was scared of herself, or rather the other her when she was alone.
Day by day, she was getting weaker, and it was getting stronger.
And soon she wouldn’t exist.
But she was, by now, resigned to this.
She just wished it wasn’t so.
So involved in her thoughts was she, that she didn’t even hear the door open, didn’t even hear his footsteps.
Didn’t even acknowledge his presence until his arms were around her, his lips in her hair, soft, soothing words caressing her ear.
And only then did she lean into his embrace, finally allowing her body to relax.
He had never really realised just how fragile she was, both in body and mind.
Especially in mind.
She was like a terrified child, seeing and hearing things no one else could.
It was like she was locked inside that closet, with the monsters breathing down her neck, whispering poison lullabies into her skin.
No wonder she was so scared.
And he would be her light in the dark, telling her that he was there, that he would always be there. And meaning every word too.
He didn’t want to see this scared, vulnerable girl anymore.
Her armour was eroding away, and he could see her true colours. Just as she was beginning to see his.
And this, surprisingly, suited him fine.
She wasn’t sure why he was being so kind.
But at this particular time, she didn’t mind.
It felt nice, to be comforted.
To be held.
To be cuddled.
To feel that maybe everything was all right, if only for a split second.
Because that second was still a second, and it still mattered.
“Thank you” she whispered.
And he gave no response, save for hugging her harder.
She started crying again.
He pulled her slender, trembling body against his, gently stroking her back.
He’d never thought that he ever had such a compassionate side, and yet there was just something about her situation that made him want to do everything he could to fight away her demons.
Demon.
She was beginning to realise that they were perhaps not as different deep down as she’d always thought.
He was beginning to realise that he could actually understand others were so fond of this girl.
She wasn’t looking for a boyfriend, she already had one she loved.
But perhaps she’d found a friend.
And she needed one of them right now.
He wasn’t looking for a girlfriend.
Besides, he didn’t know what a relationship was.
But perhaps he’d found a friend.
And that was even better really.
After all… it’s a comfort to know that you’re never alone.