The haunting of the Hellbound Hotel has arrived… eek! 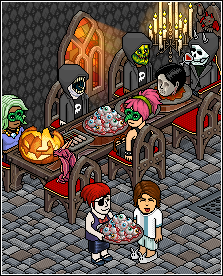 Just when you thought it was all safe, Kitano had an eye-witness account of the so-called ‘ChronoZomfg’ and learned a little bit about the history of ‘ChronoZomfg’. Here is how Kitano came to meet him;

“Dark times in the Habbo Hotel. I (Kitano), had arrived late to the office, and was having a bad day when my secretary told me I had a visitor. As I entered the meeting room, I found myself face to face with evil incarnate… ChronoZomfg. A grotesque, cracked mockery of the human face confronted me. His facial features, so unfamiliar and alien to the eye, torn and degraded, twisted beyond words. His body a patchwork of seemingly impossible horrors. I wanted to throw up, runaway, hide under my bed, or feed my secretary to him.”

Knowing our lovely and strong hotel manager, Kitano, he didn’t run off and scream but instead he confronted the beast and here is what was said:

K: “What do you want?”
C: “I have a story to tell you, a long tale of woe and despair, of suffering and violence. A tale so grim-”
K: “It’s a Monday dude, out with it.”
C: “Okay. Well as you may or may not know, many years ago, before Habbo Hotel officially opened it’s doors there was a Beta. The interim Hotel Manager was called Senaa, and she was my mother.”
K: “Skip to the end.”
C: “My mother abandoned me, and I was raised by demons. And now I have returned, for vengeance. I will send this Hotel to hell where you will burn with me for an eternity!”
K: “Lame.”

After the terrifying encounter, Kitano rushed back to the staff HQ in order to inform Neja and Puffin about his experience:

K: When I told Puffin and Neja about this encounter, they stared at me with disbelief, horror and mustard on their faces…

P: “So what we going to do?” Asked Puffin.
K: “I don’t know.” I said, I just bought us two weeks though.
N: “We will fight the demon. And to fight demons, we must become demons. We will train and battle and fight!” Shouted Neja, pulling a huge sword out of nowhere.
K: “Wait, said, Kitano. Is fighting the way to defeat him? Violence solves some things, granted, but maybe there’s another… sneaky way… to use his power against him. Like a mirror.”
P: “I think we should use the power of friendship to cool his heart boiling with hatred.” Said Puffin. “Or perhaps reunite him with his parents.”

K: The three of us could not decide how to defeat ChronoZomfg. We argued for hours, chairs were thrown, and by lunch time tension was running so high we could only talk to each other only through mimes dressed as incontinent elephants.

What on earth (or hell) could this be suggesting?! You guessed it… a brand new competition! For this new competition, you need to decide which team you are going to be on (each team is led by a different hotel manager) and you will be striving to get as many points as possible for that team by competing in many events, competitions and quests over the coming week! Here are the 3 teams you can choose from:

The Dungeon Crawlers, led by Neja
The warriors and gamers group. These guys are prepared to fight their way through any obstacle to defeat ChronoZomfg and destroy him!

The Serpents Of Doom, led by Kitano
This group prefers brains over brawn, more drawn to trickery and deceit than combat. They plan to defeat ChronoZomfg by turning his hate and madness against him, and then force ChronoZomfg to serve as a hotel janitor… forever.

The Dawn Fighters, led by Puffin
Albeit blood thirsty and fierce, this group relies on neither violence or trickery, but instead on the power of loyalty and friendship. However… don’t cross them, cause you’ll have hell to pay. Quite literally speaking….

To join a team, you need to search ‘DarkFight’ and visit the room ‘The Hellbound Lounge’ – once you enter, a poll will appear which asks you to choose a team that you wish to support for this years Habboween event.

Once all the points have been counted, and the scores verified, the team which gains the most points will go on to defend the hotel against the evil ‘ChronoZomfg’… it’s not a challenge for the faint-hearted!

Each team member shall receive their very own badge (each team badge is different)  and the winning team shall receive another badge followed by some secret Halloween prizes!

So, what you waiting for… Christmas?! Get down to that official room right now and participate in this fabulous event! Also, don’t forget to have a haunting Habboween!

Are you looking forward to Halloween this year? Which team will you be joining? Share your view now by clicking ‘Read More & Comment’!