Thieves have stolen more than £20,000 worth of Derby’s Christmas lights! 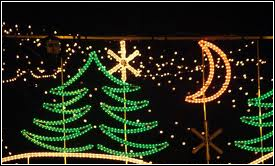 Derby’s ‘switch-on’ festival may be delayed due to thieves stealing the £20,000 worth of Christmas lights that Derby council had purchased. The theft occurred at an inconvenient time (only a few days before the ‘switch-on’ festival) and contractors have stated that it may be a huge struggle to find replacements in time for the ceremony.

The lights were stolen from a storage unit at Markeaton Park at about 05:00 GMT on Thursday via a cherry picker lorry which would have originally been used to place up the lights in the city centre.

As if one break-in wasn’t enough, a second break-in at the same storage unit was reported on Friday. Luckily, nothing was reported stolen this time (if it was a second lot of thieves… the first group beat them to it) but a wall was damaged.

Phil Derbyshire (oh the irony), head of maintenance and energy for the council, had a lot to say on this incident:

“Contractors were on target for installing the Christmas lights around the city centre. This will now impact on us getting the lights ready for the switch-on on the 19th of November.”

“However, our contractor is doing their best to source replacements but clearly there is high demand for these types of products at this time of year. Every effort is being made to get us back on the problem.”

The stolen lorry is a ‘white Iveco Cherry Picker’ with a ‘yellow Versalift ET38NF’ cradle and has the registration number ‘Y83 KDK’. Anyone who has any information on the incident should contact Crimestoppers or Derbyshire Police.