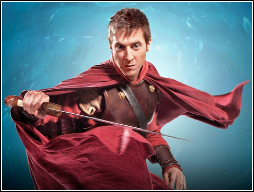 Doctor Who’s currently on a hiatus (mid-season break), but Arthur Darvill has said that he thinks that the second half of the current series of Doctor Who will surprise the viewers greatly.
Darvill, who plays Rory Williams on the show,revealed to the BBC that the revelation which made up the finale of the first half of the season – that he is River Song’s (Alex Kingston) father – is insignificant compared to some of the director (Steven Moffat)’s future plans.
He said: “I’m so excited [about] the second half of the series that’s coming up – what Steven has done is something quite brilliant – it’s really going to surprise people.”
He went on to praise the media in their handling of spoilers – “The press have been really good at keeping things under wraps – otherwise it’s like watching a football match and knowing the result. I suppose it’s testament to the show that people care about it so much.”
“I forget what I can and can’t talk about, so I end up talking about nothing for hours – which has become quite a skill. My mum sent me a text straight after the episode saying, ‘Does this mean I’m Alex Kingston’s grandmother?'”
Even though the next season (seventh) of the new Doctor Who has already been commissioned, Moffat admitted recently that he isn’t sure when it will be broadcast.