You want new ideas for competitions, new ways to win furniture, well lately Habbo hasn’t
been living up to your 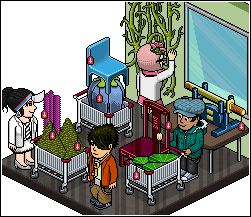 Lately Habbo has hit a speed bump when it comes to the Originality of their competitions and product campaigns, they are pretty much focusing on finding ways to get you to spend you money the fastest, by introducing new lines of furniture, and within a day or two of the line’s release, introducing a “fun”, “new” (I use quotes on both for a reason) room building competition for you to spend your coins, and build huge rooms with the brand new furni. In return for your efforts, they offer small things, such as worthless badges that were probably made in just five short minutes, and possibly more of the furniture you just spent 100s of coins on, If I were to offer you, the public, one piece of advise, it would be, don’t enter the competitions!

Okay, now that I have made that point, let’s move on to the next thing, seasonal quests. When these things were first introduced, they were somewhat fun, but in the end, all we had to do was find a piece of furni, and click it, which gave us snowflakes (the first time they did seasonal quests was last Christmas and the currency was Snowflakes, as it is this year, by the way nice originality Habbo) which earned you frozen versions of many popular rares, the downside was, all but the two most expensive things at the time, where not trade-able (which was later changed, and some of the higher end pieces of furni also became trade-able). Well to get to the point, they did this over and over almost every major holiday season, such as Easter and the summer months. The summer furni line was just recently discontinued. This repetition is what I believe is making Habbo as bland and boring, as some people believe it is becoming to be.

So the main idea of what I am saying here is, Habbo really needs to step up their game, and they should do it fast before everyone leaves them in the cold hard dust of bankruptcy.