A woman, thought to be the oldest in Wales, has died just 1 day before her 110th birthday. 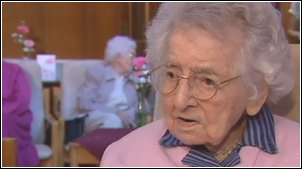 Esther Vickery was born in the year Queen Victoria died and lived most of her life independently, until 2005 after ‘a fall’ causing injury to her legs. Meaning that she didn’t enter a care home until she was 103. Esther was born and raised on a farm and her first job was delivering milk via a horse.

Esther had been a devout chapel-goer all of her life, she never smoked, drank and lived independently from 1964-2005 (41 years) after the death of her husband ‘Tom’. After she married Tom, they started the Pwll-y-Whyaid farm and lived there until the 1950’s, when they decided to move to Papermill Farm in Ystrad Road.

Esther continued to live there even after the death of her husband, until 1986, when she decided to move to a house in Waunarlwydd. She lived her until 2005, after a fall restricted her mobility and forced her into a care home.

Esther is leaving behind 1 son, 6 grandchildren and 12 great-grandchildren who are sure to admire her for years to come.

On her 109th birthday, Esther said “It’s plenty of hard work and no drink. But people that drink live a good long life too, so it can’t condemn them!” She also put her longetivity down to her faith in God.

Jane Thomas, one of the carers for Mrs Vickery, said “Esther lived a remarkable life and was always regaling us with stories about her upbringing, her farming life and her family, to whom she was devoted. It was such a pleasure to take care of her.”

R.I.P Esther – we all wish to live as long as you!