Ethiopia have been suffering terrible droughts for 3 months, and the UK have now pledged £38m in food aid for the starving people.

This money will feed 1.3m people in the worst affected areas, outlined in the picture, for up to 3 months. This may not seem like much, but it will keep many people alive for enough time for them to maybe celebrate their birthday or a funeral for a friend or relative. 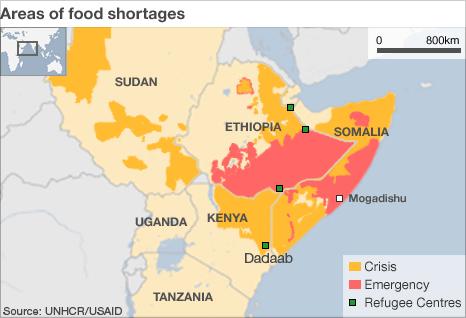 Andrew Mitchell, the International Development Secretary says the World Food Programme will help to feed a further 330,000 children and mothers struggling from months of malnourishment. Up to 3.2m Ethiopians are suffering from exceptionally low rainfall, leading to unacceptable crop harvests, and the edible crops are few. The UN are calling for aid across the Horn of Africa, an area in the middle of Africa that suffer the most from drought, affecting up to 10m each time.

Some areas have suffered the worst drought in 60 years and the UN now classifies large areas of Somalia, Ethiopia, Djibouti and Kenya as in a crisis or an emergency. The map key explains which countries are in a state of emergency and on the borders of these, the ones in a state of crisis. Andrew states: “Through no fault of its own, the Horn of Africa is experiencing a severe drought caused by the failed rains. Britain is acting quickly and decisively in Ethiopia to stop this crisis becoming a catastrophe. We will provide vital food to help 1.3 million people through the next three months. This situation needs an international response and Britain is calling on the international community to provide fast, effective relief.”

What do you think? Is this something that needs to happen, or do we need to help urgently? How much have you donated, or how much do you want to give? If I knew where to send it, I’d give £5-£10…