The ECB has offered loans for European banks to help boost the economy. 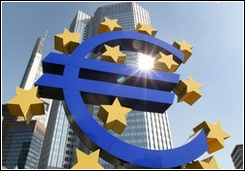 Almost £375 billion ($643 billion) has been given to over 500 Eurozone banks, who jumped at the chance of a 3-year loan to help them get back on track. The European Central Bank had originally planned to donate a lesser, undisclosed amount, to stop the continent falling back into a credit crunch.

At the time of announcement, the value of the euro rose sharply, but later fell through the day. French President Nicolas Sarkozy believes that the scheme will promote growth in the economy, but some financial analysts are more doubtful of the plan. Jonathan Loynes of Capital Economics thinks:

“The very heavy take-up of the ECB’s three-year, long-term refinancing operation provides some encouragement that banks’ liquidity needs are being amply met,” said Jonathan Loynes at Capital Economics. But while this might help to address recent signs of renewed tensions in credit markets and support bank lending, we remain sceptical of the idea that the operation will ease the sovereign debt crisis too as banks use the funds to purchase large volumes of peripheral government bonds.”

Many banks in Europe owe money to their respective governments, and Sarkozy wants them to repay prior loans. This theory has been titled “Sarkozy trade”, as it is his intention. This strategy may seem silly at first; taking out a loan to repay another loan. But, it may be a success, even if some banks will inevitably misuse it and fall further into debt.

What do you think? Are you interested in how your bank does internationally and these extensive loans will help? Or do you think it’s a load of old baloney, for so much money? Leave your thoughts below!