I know I know, Eurovision has been and gone, gladly in most cases, but it makes me weep :'(. 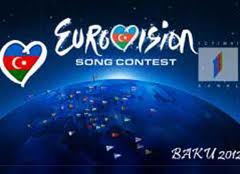 It’s old news, but Azerbaijan had a close win followed by the amazing Italy who pipped Sweden into 2nd. This article won’t be focusing on the old, but looking forward to the shiny new contest in Baku in the middle of next year…

Firstly, finances. The best way to generate money for a big event is to tax people. In Azerbaijan’s case, they won’t be raising taxes, but will take an alleged 20% of all income and put it into storage for hosting 2012s biggest music event, and probably Azerbaijan’s too. They’ve also planned out their preparations, with the main tasks and most important moments being planned already, according to news reports posted in the last several hours.

The venue has also been planned, and many dozens of European design and building companies have sent in ideas. The primary choice has been a German construction group, who have proposed a giant glass dome slap bang in the middle of the Caspian sea. This is to include the whole audience in the performances, and the TV broadcasters will have a 360 degree view to film.

The First Lady of Azerbaijan, Mehriban Aliyeva has been appointed the head of the organizing committee for the event, and has decided the dates. The semi-finals will be held on the 22nd and 24th of May respectively (2012 obviously) and the final will be shown live on Saturday the 26th of May, 7PM in GMT. This time isn’t confirmed, but is a usual choice for the contest…

Comment with your opinions, do you want a less-developed country like Azerbaijan to host the event, or would you prefer a more reliable place to hold it?