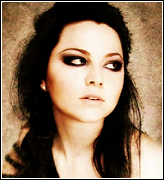 You are in for a treat if you love the top selling rock band Evanescence who sing the chart topping song Bring Me To Life. Soon they will be making their way back into the music world! They have spoken about their very long awaited third album, which is almost finished and will be out this October!

Singer and pianist Amy Lee has talked to Billboard about their new album, their first since 2006‘s The Open Door, she says it is a far more different album than their previous ones, likely because her top writing partner Ben Moody is no longer with the band. Amy Lee also added, “This time everybody had something to do with it from the ground up”, followed by, “The way everyone is playing strong, it’s like we’ve been playing the songs on tour for a year.”

Evanescence have sold almost 10 million copies of their first and second albums but haven’t recorded for six years or played live for two. They’ve already booked to play Rock On The Range in Canada on August 20 and at Rock In Rio in Brazil alongside legendary bands such as, Guns ‘N’ Roses and the reunited System Of A Down. So yes, prepare to be amazed as the band will have finished the album by the end of this month, and it will come out on October 4th!