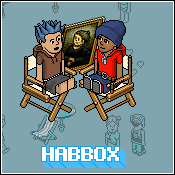 Name: Matt/Matthew
Year You Joined Habbox: 2004
Age you joined Habbox: 11 years old, If I remember correctly!
Past Departments worked for:

How much did you enjoy the department(s) you worked for?
I don’t remember much about graphics apart from being hired by —MAD– and I was fired from that role due to inactivity. But I enjoyed working in the forum moderation department as it’s a great department to work in and back then was just fantastic times. The people were great, everyone talked and it was just a lot of fun. (The department today is still great and the people who work for it at the moment are good too)

Any suggestions for staff in that dept so they could get to your role eventually?
Stick with it, stay dedicated and do the best you can do. Also talk to other staff members, managers and so on as it helps for people to get to know you better.

What does your current role consist of?
My current role is General Manager and that can consist of a number of different tasks. Like recently, I’ve made sure that the HxSS has been organized and a good number of events have been booked for most of the 14 days alongside with Bolt660 and other members of management. So one of the tasks could be organizing big Habbox events. I would also deal with any problems that may occur on Habbox whether they are staff issues, department issues or just issues in general of the whole Habbox site. It is also my job to read any feedback threads and take any ideas that may get mentioned in there and put them into practice and for them to actually happen. Other small jobs would include: updating Habbox Facebook and twitter, replying back to any support emails, being active on Habbo and begin involved in our main userbase community. There will be other stuff I do but most likely missed them out.

Is it a difficult job?
I wouldn’t say it’s difficult but at times there is problems that need to be solved that can be quite difficult to do or even stressful but overall it’s fine.

Have you ever gotten frustrated over something in your current role?
Yes, many times! Just ask HotelUser.

What separates Habox from all the over fansites & what made you devote your precious time to habbox?
When I first joined Habbo, back when there was actually a number of staff based within the United Kingdom! Habbox was one, if not the biggest fansites there was around and it was one of the major ones I’ve only signed up to. Due to that, I decided to stick around as I thought it was the best and that nothing could beat it. I still believe Habbox is one of the best fansites there is to offer for any Habbo users who use Habbo.com.

What do you do outside of Habbox?
Mostly at college studying for the course I’ve taken. When I go back it will be my last year and then we shall see where life takes me!

When do you see yourself saying farewell to Habbox forever?
Tough question, hmmm I would say within the next couple of years at least. I can’t put a date to it and it would depend what I would be doing at the time in life and so on.

Why should our Habbox viewers apply for a Job at Habbox?
Because we are freaking awesome!?! But in all seriousness, because it’s a great experience and opportunity and you would be working for one of the longest running Habbo fansites in the world of Habbo. You also have the chance of meeting new people and can make some pretty cool friends!

So there you have it! An exclusive interview with the current General Manager of Habbox. I hope you enjoyed reading this interview and found it very interesting, keep an eye out because there will be many more interviews to come. Also a massive thankyou to Matt for responding to my qeustions.

Post what you found interesting about this interview below and you may even get a response!