A 74-year-old man has just received a letter from his sweetheart that was written in 1958! 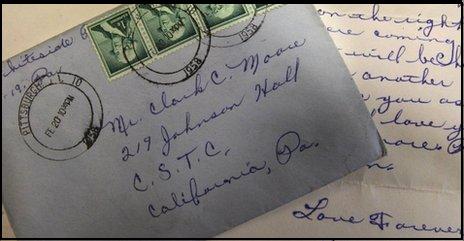 The letter, postmarked for February 20th 1958 was unearthed in a Pennsylvanian university mailroom, where Clark C Moore was studying. Since then, he has changed his name to Muhammad Siddeeq which completely stumped investigators who were searching for the name Moore. The letter was then shown on an American TV show which prompted a friend to phone Muhammad to retrieve the mail.

It was a two-paged love letter signed “Love Forever, Vonnie“. It may be difficult to see from the photo, but it’s definite that the letter is not a hoax and specialists were hired to check, who confirmed its authenticity. Only years after the letter was sent, the couple married and had 4 children, but unfortunately have separated since then.

“We have a system here in America where if something is for you and if they find it, it gets to you, that’s beautiful.” Mr Siddeeq told reporters. After information of the letter, he wasn’t sure about reading it after their divorce, but the university are sending him the envelope along with a community T-shirt. “If I don’t get that package within the next 53 years, I’ll call to complain…” he jokingly told news crews.

What do you think? Are the American mail system to be shamed? Or is it just a mistake that anyone could make? Leave your thoughts below!