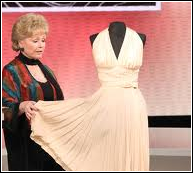 In the film ‘The Seven Year Itch’ Marilyn Monroe wore a stunning ivory pleated dress which has sold at auction in Los Angeles for $4.6 million (£2.8 million). Actress Debbie Reynolds had the dress in her collection of film memorabilia, which she has collected over the last four decades. In the collection, she had amassed around three thousand five hundred items of props and costumes which she began collecting in 1970.

Seventy nine year old Ms Reynolds, had hoped to house the collection in a museum, but unfortunately the idea never took off. Also included in the auction was the headdress worn by Elizabeth Taylor in the film ‘Cleopatra’, one of Charlie Chaplins bowler hats and Julie Andrews guitar which she played in ‘The Sound of Music’.

It was reported that Ms Reynolds cried as the auction for the Seven Year Itch dress finished. It was thought  by auction house Profiles in History that the dress would reach about $2 million. An unidentified buyer purchased the dress by telephone bidding.

Another Marilyn Monroe red sequined dress and feathered headdress worn in the film ‘Gentlemen Prefer Blondes’ was sold for $1.4 million (£1 million) and the saloon girl costume she wore in the film ‘River of No Return’ sold for $510,000 (£315,00). Ms Reynolds had been given many of the items by her close friend Dame Elizabeth Taylor, who has recently died.