20 People last night were injured in the protests in Rome – Italy. The Police used several different methods of attempting to separate the protests for example:

Organisers expect rallies in around 82 different countries, reaching a full circle once hitting New York. The financial crisis is hitting people low and hard in the financial area of the world. 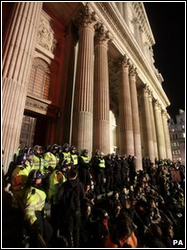 Protests:
In Rome – Italy last night ten’s of thousands of people turned up in Rome to peacefully protest. Militants dressed in black, infiltrated the crowd and then started to attack the shops. Some of the Italian police officers was set on fire due to the protestors, 3 Police Vehicle Cars were burnt down and also there was attacks on Cash machines and also shop windows.

In London – United Kingdom previously this week, 1000 people turned up in a riot however, was prevented to reach the “Stock Exchange” by the police.

In Dublin – Ireland around 400 people marched towards a hotel where an EU/IMF/ECB delegation was being held involving the countries about the ongoing financial bailout.

However, people of all ages, from children to the elderly and many of unemployed people has gathered for the evening rally in Peutra del Sol Square, however this is where the “Indignant” movement started up in May.
It has been said hundreds of people marched in New Zealand, where as cities like for example Sydney – Australia, it has been said that some of 2000 people, including several representatives of different Aboriginal Groups; communists and also trade unionists had rallied outside the “Reserve Bank of Australia”.