Fox gives birth to four cubs… under a bed! 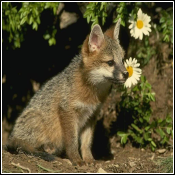 As bizarre as it may sound, a wild city fox has given birth under a bed… in a house! Okay, so basically I was sitting at home, relaxing, listening to HabboxLive and playing Habbo as you do on a Tuesdays evening after College *wink face* when I got a phone call from a close female friend of mine. Answering the phone as you do with a nice “Yeah?” was a reply that went along the lines of “Oh My God! Lamar, there is something under my mums bed making noises… I’m scared” So in my head I was thinking what on Earth is this girl talking about? I replied “lol, are you being serious?“

Anyway! The conversation went on and she told me she has to go because she has to help pull the bed out. So then I get a text a few minutes later saying “Lamar, it’s something small and white” so I replied “It’s probably just a house mouse or something!” but about 10 mins after that my amazing ringtone went off again (Drake – Make Me Proud ft. Nicki Minaj) so I answered and was told that it was a Fox, that got into the house because the garden door was left open. And not only was it a Fox but it was a mummy Fox that had given birth to four (4) Fox Cubs!

It was probably a suitable place for a Fox to give birth because it is dark and warm under a bed, especially when it’s quite cold here in London so the central heating was on, but a Fox giving birth in a house is something I have never heard of before in my life! I’ll get her to take pictures and I will post them in a splendid thread on our very on Forum which can be found here.

Have you ever heard of such a wacky story!? What will she have to do now because if she touches those cubs she may get a nasty bite! What do you think? Post a comment below and let the HxCommunity know!