Floods have been making a huge splash on the UK with more warnings to come! 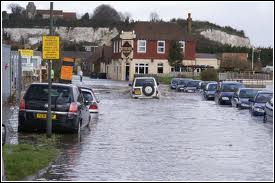 Torrential rain has affected many parts of south-west England, Northern Ireland and Wales, causing flooding in many areas and this is only the beginning. Warnings have already been issued for North and East Yorkshire and Pembrokshire due to the rain sweeping inland, however meteorologists are saying that the heavy band of rain shall eventually ‘clear’ as it moves further in.

The Environmental Agency has said that winds and high tides on early Tuesday morning, could potentially cause problems. Meaning immediate action will be required, as more warnings are likely to be issued for more parts of England and Wales.

The floodwater has already closed roads in Torquay, Torre Abbey, Livermead and Torbay due to a heavy amount of traffic being slowed down by the floodwater. The floods have also caused minor damage to a care home and some other properities could potentially be damaged if the rain gets worse.

An amber alert has already been issued for Wales with up to 100mm (10cm) of floodwater expected, but the situation is much worse in south-west England, where up to 150mm (15cm / 5.9 inches) of floodwater could occur. This means that many drainage systems will be unable to cope, rivers may overflow and traveling will be an “absolute nightmare”.

There are also problems in Scotland, with 3 flood warnings issued for Tayside, Dundee and Angus.

The only solution the authorities have planned at the moment, is temporarily closing roads for everyone’s safety – there’s not much else they can do until the storm is over.