After a long rest period to write their new album, once again Florence and the Machine is the number 1 UK artist. 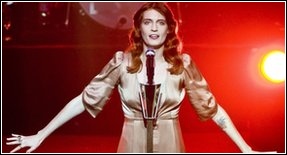 Florence and the Machine, named after the vocalist Florence Welch, and the Machine half comes from various backing vocalists present in most of her her songs. Her first album, Lungs, released in 2009, stayed in the charts for a gargantuan 65 weeks, making it one of the most successful albums of 2009 & 2010.

Many singles from the album charted well too, such as You’ve Got the Love and Dog Days Are Over. During the two years since, they have performed at the Lungs tour around the UK and many of their songs have appeared in films and television productions.

Ceremonials, the second album, was released earlier this week and has already sold over 90,000 copies, and has gone straight to first position in the UK Charts. However, during the early stages of writing Florence had some conflicting ideas. Originally, she produced lyrics and beats to incorporate her passion “I love big, American pop music. I’m a total sucker for it!”. Thought after thinking about it, she decided that it would be unjust to create an album so different to Lungs.

Professor Green’s Read All About It remains at number 1 in the singles chart, closely followed by Rihanna’s We Found Love at number 2. Cher Lloyd is the highest new entry at number 4 with With Ur Love.

What do you think? Are you happy to have Florence and the Machine back in music? Or would you rather have had a different artist at number 1? Leave your thoughts below!