Well, what can we say, right now? If you, as a fiery and proud Simmer, were planning to break the piggy bank with your hard-earned Euro (or, as you like to call: real-life §imoleans!) in an average MMO full of blood, anger, and legendary topaz swords, do us both a favour and postpone it for a minimum of two years. That’s because the news we’re about to give you will leave you so amazed and shocked that we’re already here with the proper quantity of stretchers and remedies as we inform you about the triumphant (albeit unofficial) return of The Sims Online, even if all you have in your wallets are distracted and dusty flies.

Users who spent a lot of time asking themselves how fun it would be to experience an online version of The Sims surprised themselves with the release of the BETA version of FreeSO, an independent and “non-governmental” fangame. A team (also enthusiastic for the first version of Will Wright’s Life Simulator) has collected little fragments from the ruins (source codes and stuff) of the extinct The Sims Online and rebuilt the game in a way that was ALMOST true to the original. This is done with perhaps only one difference: by operating under a more contemporary engine, in contrast to the already outdated one used in 2002, it will run with flying colours on modern computers, including yours! 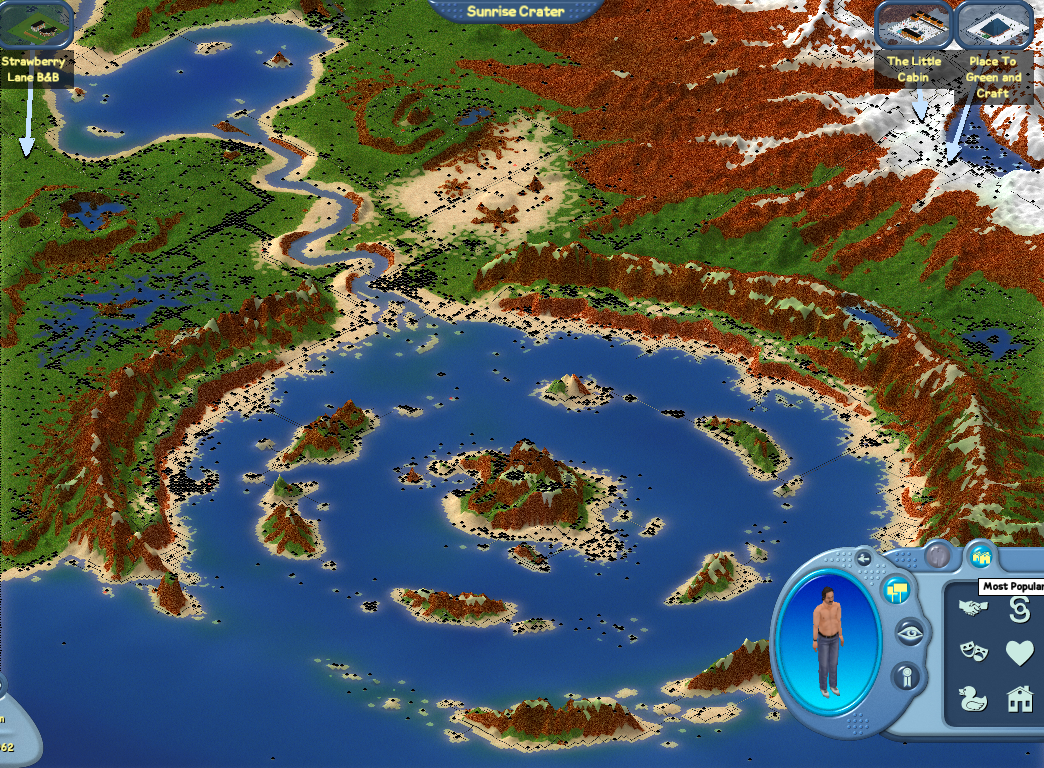 Seven months after the launch of the first public BETA, we were able to feel the successful progression of Sunrise Crater, the only village/sanctuary of the game, through the small houses seen from a distance in the map view: small ants created by thousands of “human” hands, searching for steak, jacuzzis, and peace.

The features of FreeSO can be entirely confused with those from The Sims Online because they are the same game! However, the latter is a fangame whose only objective was to rebuild the original (and paid) one. For those who are already familiar with the simulated art that ridiculously mimics life, you won’t find tons of new and groundbreaking elements here. To be completely honest, you probably will face yourself noticing how some functions and buttons are missing or not working here and there, mainly because some of the features included in the original game have not yet been implemented or are somewhat imperfect at the present moment. But don’t close this tab yet! On the other hand, we still have some good reasons for you to wait for the torturous 1 Gigabyte download and experience FreeSO, even if only for a few minutes: 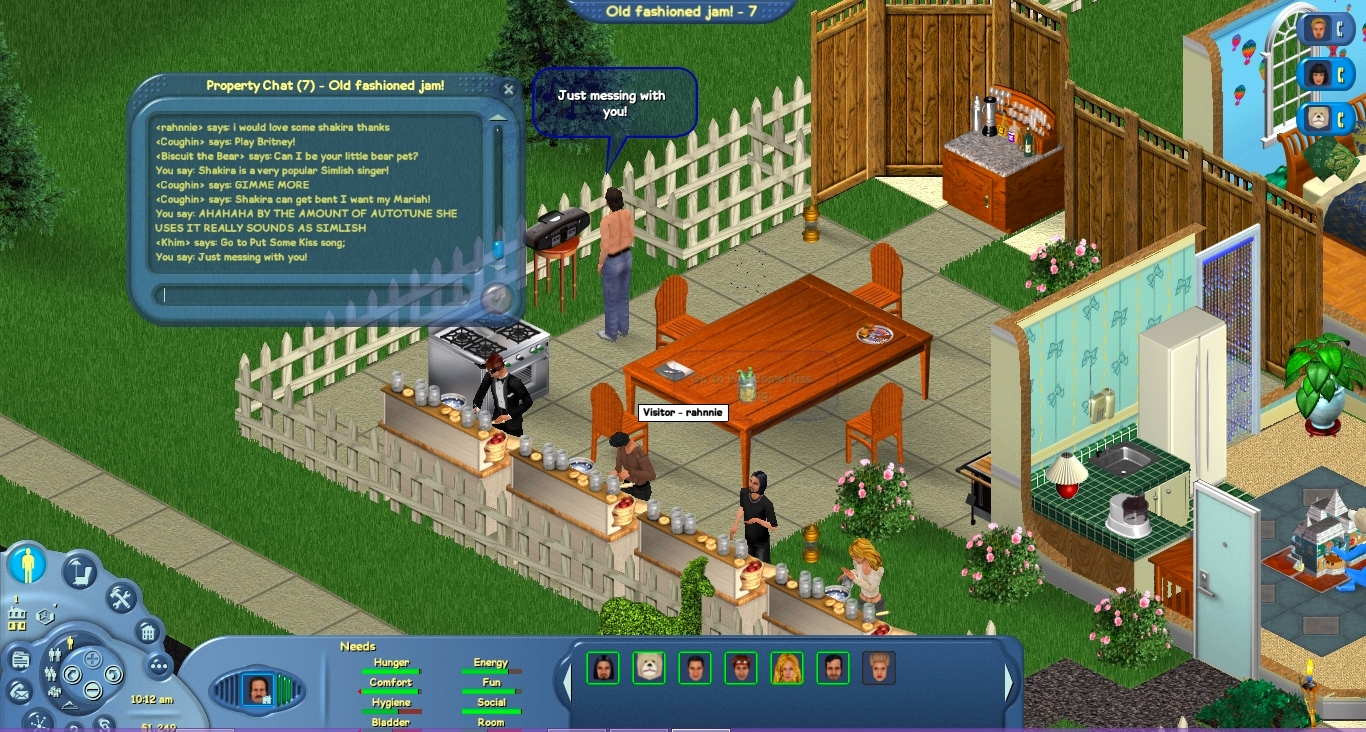 An epic August 7th. Two Brazilians with identity problems, one bear playing The Sims (inside The Sims), and Arizona’s polygons around a whitish fence. In a nutshell, all your American dreams can come true, when you decide to release a “Hunger: 7” Hamburger Party.

Seventeen years after the release of the father of all “The Sims”, and after witnessing such gigantic progress over the years (at least visually and fairly in gameplay), the possibility of visiting neighbours in a Sim universe can now be considered an old element and not worthy of note. But if we stop to think that Sims Online was officially released in 2002, we conclude: The Sims 3/4, after all, had a game to inspire itself. With just a click of a mouse, you become able to travel hundreds of miles inside Crater to visit and have access to one of the thousands of homes created by funny people like you and – as you can imagine – this consequently allows all the rest the world to play your doorbell too.

“We can do that in Habbo, though”

This is true. Both games present very similar concepts but a simple change in the way things work within the Sim Universe causes this action – visiting the homes of others – to be carried out in a culturally different way. Oops, hahaha. I hope this makes sense, but you see, I believe that players substantially feel compelled to interact and visit the home of others because they have their Needs to supply and the lack of care with this is not very recommended (unless you want to become a GHOST). And, precisely because they need interaction and always having “green” needs, it is not difficult to find people gathered inside the houses and simply chilling, hosting some sci-fi themed house parties, group studying or any of the fun stuff you can think of. Most of the players are “castaways” from the former versions of The Sims Online (2002-2008); some are older than 29, and all of them are well-balanced (haha), interesting people, and do enjoy RPG from time to time.

And finally, one of the most interesting additions to FreeSO is the recent power to convert all objects from the game to 3D figures (including the well-known 2D sprites of furniture!), so you can, for the first time, have the strange feeling of playing a The Sims 1 made entirely with polygons. Something that, before this, only existed in our most hopeful nightmares. To date, this 2D-3D conversion is still very rudimentary. This is because it is a feature that is in its early stages of development, without a single “human touch” in the middle of this process, just a rational computer generation of what the program thinks are the geometric shapes of the furniture, making converted objects look like… plastic!? But, hopefully, this is only a temporary problem and, come on, this does not spoil the curious experience of having a new, differentiated perspective for this old universe!

Well, this is what we can offer you before this article ends up becoming a PhD essay (TOO LATE!). So let’s leave below some links that will give you a better idea of how crazy this game is, and why it deserves a space in your precious HD, especially if you’re one of the Hardcore Simmers we usually get to know around here. But, also, don’t watch tons of videos of it before actually playing it, or else you won’t have a thing to discover by yourself, inside!!

Someone taking the first steps on FreeSO and, also, trying to fit herself in the world, despite the bugs and unanswered questions.

A tour in a Full-3D version of Sunrise Crater; The end of an era!

For those interested, you will obviously find all the necessary information on how to install the game (take a while, and this is extremely tedious, but you will be well rewarded!) On the official FreeSO website by clicking anywhere in this paragraph.

For now, that’s all! Sunrise Crater will always be open to those who have the nerves to wait for the download to finish! A big hug!

IMPORTANT WARNING: Playing FreeSO in no way works as a complete substitute for that wonderful game named Habbo, in case you are wondering right now. Therefore, for FlyingJesus’ sake, keep playing Habbo unconditionally and keep aiming for that rare you badly fancy because, one day, it will be yours, we promise you.

i wanna get it but so much effort to download 🙁

[…] Informations on that Topic: habbox.com/all-articles/freeso-review […]