Google was founded on the 27th September 1998 by Sergey Brin and Larry Page, and was founded in California. According to 2010 records, Google currently has 28,768 employees, and has made $8.505 (£5.410) billion in profit. Google is well known for having interactive logos for certain anniversaries, and also has one for its 13th birthday! 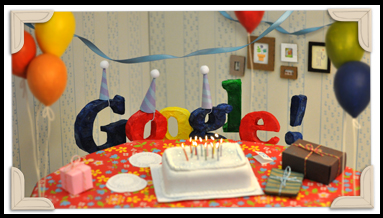 It is estimated that Google processes over one billion searches every day, and runs over 1 million data servers around the world in different data centers. Since its release, and rapid growth, Google has released other related programs such as it’s “Gmail” email service, Google Plus and Google Buzz.

Google also have applications such as internet browser Google Chrome, and the Google Talk instant messaging service. Google also owns and has connections with sites such as YouTube, Orkut and Blogger.

The Google company also leads the development and design of the Android mobile operating system which is used on many phones and by many phone companies such as the Samsung Galaxy and the Motorola Droid. It is said that Google and its chain websites lie in the top 10 visited websites, around the globe.

The name ‘Google’ eventually came from a misspelling of the word “Googol”, and the founders originally planned to call it “BackRub”.

So how often do you use Google, and its related websites? Happy Birthday Google!