You heard it here first, the GOP Republican presidential race will be a bloodbath. There’s nothing more entertaining than watching a bunch of middle-aged white guys fight it over on who is going to get the nomination. For the first time ever, we may see no one get an outright majority.
Romney may be the one to get ‘a’ majority, but that’s only a majority and by a very slim margin. He has recently celebrated two big victories in both Florida and Nevada. However, he is still very far off from the 1,144 delegates to win, considering Romney only has 74 delegates at the moment. There are a total of 2,286 delegates to win. With Ron Paul, Rick Santorum and Newt Gingrich still in the race the scenario may play out very interestingly. If Romney 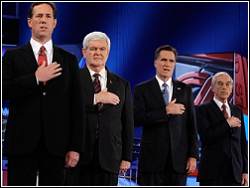 captures the needed 1,144 delegates as most pundits expect him to, New Gingrich can capture 500, Ron Paul with 400 and Rick Santorum with 200 or so, then that means that there will be a bloodbath, people will be on the floor and the other three candidates will have a lot of leverage for their proposed platforms.  Come August you could see a political spectacle all played out in front of the eyes of live television.  Some of these supporters are crazy and they will go mental come convention time.

So what’s next for these candidates?  Well, you have Maine which will be holding its caucus within the next week and then Colorado, Minnesota and Missouri all holding either caucuses or primaries on February 7. Wait a second you may ask, but Grig, what the bloody hell is the difference between a ‘caucus’ and a ‘primary’. Well there is one, and that’s where US politics gets complicated (not that it ever was that simple!) Caucuses are town hall style events where the candidate is picked from a gathering of people- sometimes in people’s kitchens! The person who garners the most amount of support at that meeting gets the delegate seats. In primaries you register and vote. Of course it is slightly more complicated than that, but we’re breaking it down to make it as pain-free as possible for you, dear reader. Then there is Super Tuesday where on March 6, a month from now, 10 states all hold primaries on one day. Usually this is the detrimental stage of the race. So now back to the race, after Romney took Navada he took a sweep at President Obama, “I’vewalked in Nevada neighborhoods, blighted by abandoned homes, where people wonder why Barack Obama failed them. Mr. President, Nevada has had enough of your kind of help,” Romney said to cheers. Romney is said to do well this month and is looking to the road ahead. Whilst Ron Paul placed a weak third despite focusing a lot of attention in Nevada, as caucus state, where he tends to do better. However, he too will march on.

Anyway, we could go on and on with in-depth political analysis and Habbox news will indeed keep you updated on the latest news from this tight election race. But for now, I ask you to join me in witnessed the blood bath that I so boldly predicted at the convention this August. Also, remember to click ‘read more’ and tell us what you think!